How Richmond Developments Got Greater Visibility And Efficiency

We need to be able to book surveys, create quotes, part invoice, order from suppliers and both pay and receive varying amounts as the projects progress.

Fell into construction after working with US tech companies who had major re-alignments due the tech bubble. Didn’t want to put my family in the hands of someone else so decided to start my own construction business. Doing mainly residential refurbishments, side extensions, rear extensions and house conversions into flats. At the peak of business I had 15 direct employees and was turning over circa £1m in annual revenue. With four or five major projects on the go the level of administration meant I had to employee a bookkeeper full time. I deployed Sage 50 and worked 16 hour days making sure jobs ran on time. Scopes were managed, staff were safe and clients were happy. Not to mention looking after neighbours, building inspectors, roofing contractors suppliers and architects.

A typical job would run for 12-16 weeks and would be billed on a monthly basis with extras and variations billed as they were completed. The administration of site wages and materials ordering was all completed using different forms of paper or WhatsApp. The building company was originally setup to do my own developments and when these were not being worked on I would backfill with paid work.
This was a great concept, however in 2008 the financial crisis meant there were very few banks willing to support a new business in what was considered a risky industry.

My employees were mostly kiwis, aussies and eastern Europeans. We worked a 08:00- 18:00 day which gave us a reputation for working hard and out performing every English building company. Our quality of finish, care and attention to the owner and speed of work were all critical elements in building our reputation.

I could see that margins were tightening and with the volume of work, flow of cash it was almost impossible to know real profitability. The reality started to bite harder when my son was spending his weekends sitting in my ute either at jobs, a supplier or prospecting a new job. I wanted my weekends and evenings back.

My kiwi team leaders were all brilliant but would only last 3-4 years and construction in the UK is different. They need to learn a new set of skills and how to work with brick, steel and significantly more insulation. This change took time and effort with productivity at the start compromised by learning. One of my final projects was to build a new house from the slab up which was fantastic fun and a realisation that my original vision for the business was correct.

Shortly after this I was robbed and over £15,000 of equipment stolen, due to me starting the wind down of the business I had let an insurance policy lapse and took the hit. With the labour transition, family pressure and pick up in the technology sector I could see it was a time to make another change.

I scaled the business back and maintained a skeleton of employees offering small scale projects and general maintenance.

How did you hear about NextMinute?

I went looking for a business application that could help me run my business remotely and allow my small team to know exactly what they need to be doing and where they should be. Invoicing clients and paying wages needs to be simple and all visible in one place. No more WhatsApp messages, paper time sheets or word doc invoices.

I found NextMinute on the Xero Marketplace and decided to give it a go.

Before NextMinute I was using Xero and word to produce my invoices and sometimes just writing them on paper. Clients get the feeing they are dealing with someone who is a bit naïve, which is fine, because I wasn’t, however paper based invoices take time, are often wrong and need to be keyed into something else – why not just do it right from the start.

Why did you decide to opt for NextMinute?

Originally I started using Xero projects and it became very apparent that this application had been written by a developer who had no idea about how a project works or how a builder uses technology. It needs to be simple to use – properly simple. It needs to have the right functionality, you need to be able to invoice a client at one price and order at another, make part payments and see exactly what is outstanding to be invoiced. I wasted considerable time on this and was frustrated that my accountant was not able to point me in the right direction. After watching a couple of videos I thought NextMinute might have what I needed

Was there a particular problem NextMinute helped solve for you?

There were a few – paying employees, this is always a area of great concern – get it wrong more than once and you start to lose the trust of the employee – lose that and you might as well start over. Getting it right the first time means everyone has confidence. Aligning the cost of labour to the right job and to the right part of the job is critical – they might be on the same job but working on an extra rather than the quoted work,. – How do you capture that on paper across 15 people? Also I need a system that is very remote – meaning I am doing a day job for someone else whilst managing a small team. I have to be well organised and cant let people down. NextMinute gives me the visibility and control to be confident that my guys are in the right place, doing the right job and I can not be interrupted with silly questions

Was there a particular problem NextMinute helped solve for you?

Absolutely. The more we get used to using NextMinute the better things have become. Before a job is started now a series of photos are taken, at the end of each day a few more photos are added and the times sheets completed. remotely I can see progress and update the client. Invoicing is accurate and timely meaning payments are never an issue. When these are supported by the photos the clients are completely at ease.

We know other people are not doing this so we can justify a higher cost. We are not the cheapest by a long way, however once again the quality of the work and the ease of dealing with us means we have a solid pipeline of work and good margins.

I have been very lucky to have experience of both not using this technology and using it, whilst there is a learning curve and time needs to be invested the end results are proof that investment in technology is directly proportional to profitability.

Construction is always looking for the latest tool to drill, break, connect, measure. These tools usually require significant upfront investment and are not used enough to justify the investment. Applications like NextMinute require no upfront financial investment and over time are able to give an accurate picture of how your business is performing. What jobs are good and which ones you should avoid. These decisions allow strategic thinking. Not everyone is interested in strategic thinking until they get it completely wrong and they are going to go bust.

Education is critical and anything that allows an insight to the future is a fantastic thing. Your accountant and your finance system have very no visibility into job costing and without this your are running your business on hope.

Hope is not a strategy.

All the builders hours were captured live, on site. The benefit of both administrative time saving but also payroll for the builders. 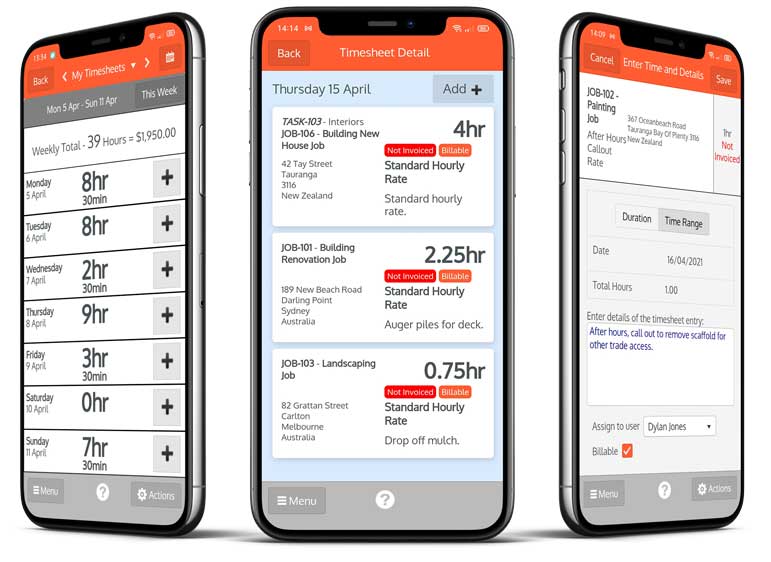 Cost, revenue and payroll all instantly in sync with the NextMinute / Xero integration. Clients get billed and builders get paid.

“With NextMinute I can pull up a job, see the costs and margin meaning I know when I am doing the next quote how I should be pricing to make good margins.”

Grow Your Trade Business Strategically, While Spending More Time Doing The Things You’d Rather Do

Page load link
We use cookies on our website to give you the most relevant experience by remembering your preferences and repeat visits. By clicking “Accept All”, you consent to the use of ALL the cookies. However, you may visit "Cookie Settings" to provide a controlled consent.
Cookie SettingsAccept All
Manage consent

This website uses cookies to improve your experience while you navigate through the website. Out of these, the cookies that are categorized as necessary are stored on your browser as they are essential for the working of basic functionalities of the website. We also use third-party cookies that help us analyze and understand how you use this website. These cookies will be stored in your browser only with your consent. You also have the option to opt-out of these cookies. But opting out of some of these cookies may affect your browsing experience.
Necessary Always Enabled
Necessary cookies are absolutely essential for the website to function properly. These cookies ensure basic functionalities and security features of the website, anonymously.
Functional
Functional cookies help to perform certain functionalities like sharing the content of the website on social media platforms, collect feedbacks, and other third-party features.
Performance
Performance cookies are used to understand and analyze the key performance indexes of the website which helps in delivering a better user experience for the visitors.
Analytics
Analytical cookies are used to understand how visitors interact with the website. These cookies help provide information on metrics the number of visitors, bounce rate, traffic source, etc.
Advertisement
Advertisement cookies are used to provide visitors with relevant ads and marketing campaigns. These cookies track visitors across websites and collect information to provide customized ads.
Others
Other uncategorized cookies are those that are being analyzed and have not been classified into a category as yet.
Save & Accept
Powered by